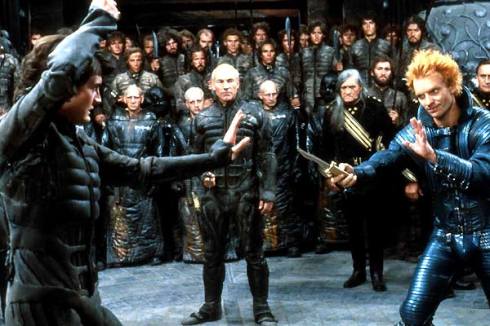 In a classic scene from David Lynch's 1984 film, Dune, Captain Picard oversees a duel between Sting and that dude from Sex and the City

Welcome to another Unseen Influences.  Today I’m going to talk a little about Frank Herbert’s Dune, and its influence on the background of 40k.

Dune is widely held to be one of the greatest science fiction novels of all time, and is certainly one of the best-selling.  Unlike the very specific influence that Michael Moorcock had on the early development of Games Workshop’s lore, Dune’s influence was much wider and more diffuse.  This is because Dune is one of the first modern science fantasy stories, and the universe of Warhammer 40,000 is squarely within that genre.

These things are notoriously difficult to define, but a good working definition I think is that science fiction tells a story in a universe exactly like our own but with different technology, and science fantasy tells a fantasy story using the traditional trappings of science fiction (aliens, space, lasers, etc).  Basically, if it would make Asimov turn in his grave, it’s science fantasy.

When the GW Studio were looking to transplant their fantasy miniatures game into a sci-fi setting, they naturally turned to science fantasy and thus Dune for inspiration.  It has prophecies, heroes, witches, magic, monsters and sword-fights, but it also has lasers, atomic weapons and space-ships.  I don’t think it’s an exaggeration to say that without Dune, early 40k would have lacked depth and had few reference points for fans besides those taken from Warhammer Fantasy Battle.  The influence of Dune on 40k was varied, but probably the most obvious and minor influences were terminological.  “God-Emperor” and “lasgun” for example were both originally Dune terms.

But the inspiration was more subtle and deep than that.  Every epic science fantasy/space opera needs to make an effort to explain how travel and communication works between planets in the galactic empire.  Dune introduced the science fantasy trope of the Navigator, human beings who through the use of the magical Spice Melange can bend space with their thoughts.  Over time the Navigators, who by the way are bred in semi-independant noble houses and are avid players in imperial intrigue, are slowly mutated to become inhuman creatures.  Sound familiar?

This “bending space with the mind to travel vast distances” thing is pure science fantasy, as is the GW re-working of the idea, traveling through a parallel hell-dimension.  In 40k Navigators are born mutants, but other than that they are pretty much torn straight from the pages of Dune.

Some other themes that 40k shares with the Duniverse are:

Now all of these shared tropes may seem so commonplace as to be trivial, but remember that Dune was written in 1965 and at that time they were innovative and exciting.  That’s why they were so attractive to the GW Studio designers back in the 1980s.

So there you have it.  I’m sure there are many other little Dune-isms in 40k, particularly in the older editions, but I’ll leave that up to you readers to discover.

This entry was posted on Friday, March 11th, 2011 at 9:04 am and tagged with Dune, fluff, Frank Herbert, Inspiration, Lore and posted in Unseen Influences, Warhammer 40,000. You can follow any responses to this entry through the RSS 2.0 feed.
« First Impressions of the new Grey Knight models
RAI vs. RAW: a new convention »